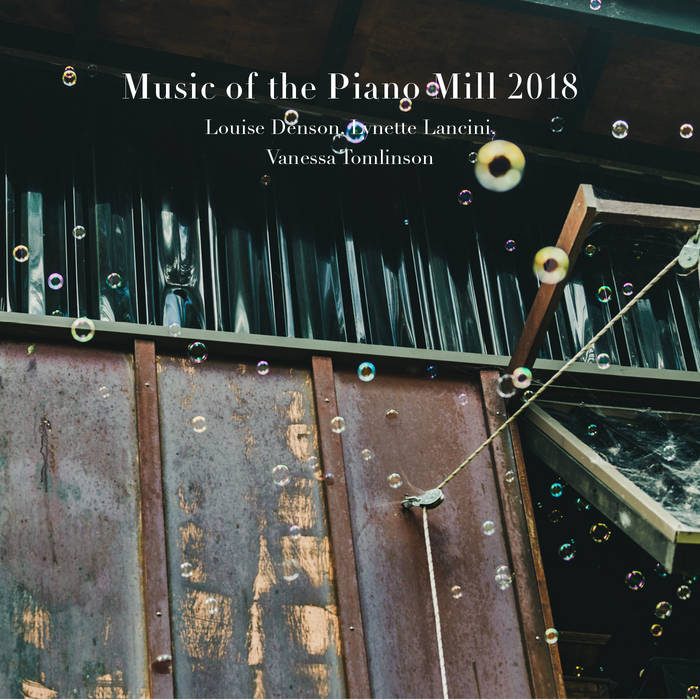 About the works
In megaMammal, Lynette Lancini conceives of the 16 pianists as a single giant organism, musicking together as one. She creates a vibrant tapestry of Britannia, Australiana, and even Russian themes, which are unified by a rolling four-chord vamp and mesmerizing vocal refrain (sung by Merinda Dias-Jayasinha and the composer). The work is framed with 19th century colonial references, from Waltzing Matilda to God Save the Queen, and ends with a good old fashioned shoot-out, bringing megaMammal to a surprising close.

Machine rhythms form the basis for Louise Denson’s driving Mill Life, in which the Piano Mill seems to come to life as a working factory. Denson painstakingly transcribed the repetitive clanking and whirring of industrial machines sourced from archival recordings (namely the “Boynton & Plummer Travelling Head Shaper” and the “East Broad Top Railroad Steam Engine”). Percussive effects and extended techniques – knocking on railings, strumming and striking the strings of the pianos – complement intricate, syncopated rhythms and bluesy clusters, which are orchestrated in exquisite detail.

In Lucy and Bubbles, Vanessa Tomlinson presents a suite of musical vignettes that seem to draw us into an imaginary story. In part 1 we hear knocking and calling (the 16 pianists call out each others’ names at random). In part 2 pulsing rhythms appear, build, are layered, and eventually climax in an incessant tritone chord repeating with “punk rock” intensity. In part 3 the mood relaxes into a dreamscape featuring the plucked tones of 2 string pianos. Finally a minimalist waltz (shades of Philip Glass?) emerges, develops, chromatically shifts, bifurcates, develops some more, until the pianists once again call out – this time searching for the elusive protagonist of the surrealist narrative, Lucy (and her bubbles).

The Piano Mill is a steampunk tower in the forest of New South Wales purpose built to house 16 vintage upright pianos. Created by architect Bruce Wolfe, the structure is a building and fantastical musical instrument all in one. The Piano Mill has been acknowledged with a 2018 World Architecture Award (Culture – Completed Buildings) and a 2017 APRA AMCOS Art Music Award (Excellence in Experimental Music).

About the composers
Lynette Lancini is a self-taught composer whose music has been performed by many ensembles including the Muses trio, Topology and the Queensland Orchestra; broadcast and toured nationally and internationally; and featured in several Australian festivals. She has created and performed scores for documentary, theatre and workshop productions, and is author to a bunch of juicy poems, lyrics, and creative nonfictions. Through an exploration of sound-based wholebody engagement with the SonicBodyCollective (2012-2014) in collaboration with sound artist Luke Jaaniste and choreographer and new media artist James Cunningham, Lancini developed new ways forward as a creative musician and facilitative artist.

Vanessa Tomlinson is a percussive artist dedicated to exploring how sound shapes our lives, awakening our ears to new sounds, in new spaces, with the hope that attentive listening will lead to attentive custodianship of place. With a long history in experimental music, Vanessa uses this body of knowledge to consider how we listen through site-specific explorations, and to explore new collaborative sonic ideas. Trained as a percussionist in Australia, Germany and the USA, Vanessa relies on this sonic investigation of objects to build compositions, create contexts for improvisation, interpret the voices of other composers and collaborate across art-forms and disciplines. She has toured the world for 25 years, premiering over 100 works by significant national and international composers, presenting work at major international festivals, and collaborating with improvisers, dancers, artists and more. Tomlinson is Professor of New Music at Queensland Conservatorium.

Home of The Piano Mill. Creating explorative interdisciplinary projects in rural Australia with a focus on architecture, music, arts, design, and environment.

Bandcamp Daily  your guide to the world of Bandcamp